It’s hard to believe it’s been over THIRTY YEARS since Def Leppard’s groundbreaking album “Hysteria” was released. I’m a big fan of the band and appreciate all their music – from their first EP to their latest self-titled album…but “Hysteria” always takes me back to a very special place.

I know some fans might prefer any one of the band’s “harder” albums prior to “Hysteria,” and some who might even favor when they changed direction like on their album “Slang.”

To each their own, but “Hysteria” remains the favorite to this nostalgic mind. 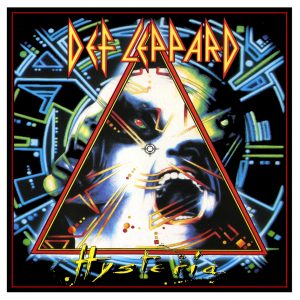 Not only do I appreciate all the infectious melodies all the songs “Hysteria” offers, I’ve noticed many fans over the years — myself included — have a soft spot for the title track. The moment those instantly recognizable opening chords begin, it’s like you’re immediately taken back to the time when this record was one of the must-own new albums of the late ’80s. (Remember actually going to a record store to buy an album or cassette?)

The album’s technological wizardry also remains impressive. (I’m a huge fan of producer “Mutt” Lange.) How impressive? I swear I still discover new things in songs when I listen to them – and that’s after three decades of heavy rotation!

Please allow me to geek out for a moment: During the chorus of the song “Hysteria,” my ears always heard the backing vocals sing the line “Do you believe it?” in the SAME octave as the previous line “Oh, can you feel it?”

In the past year or so, that’s changed.

I now hear the line “Do you believe it?” one octave HIGHER than the preceding line “Oh, can you feel it?”

I swear once you hear it registering in a higher octave, you’ll never hear it the same way again.

Credit goes to producer Mutt Lange and his multi-layered production techniques (as well as all his backing vocal contributions) for that. (Read an in-depth look at Mutt Lange’s incredible body of work here.)

Here’s the music video, right at the part of the chorus I’m referring to, so you can judge for yourself:

And who can forget this epic album’s iconic album cover? Did anyone else ever notice a full moon sometimes looks like it contains a portion of the “Hysteria” album’s face within it?

For some reason or another, I was also transfixed on record sales and the chart movement of the album’s singles back in the day. I actually subscribed to Billboard Magazine in high school just so I could study and analyze the weekly charts!

“Hysteria” had such a phenomenal run that lasted years after its release, which is also a testament to the multitude of classic songs the album included.

The first single “Women” was merely a taste of things to come.

Hit single after hit single soon followed: “Animal,” then “Hysteria,” then “Pour Some Sugar On Me” (which took the album’s sales into the stratosphere), and then “Love Bites” (the band’s first number-one single). 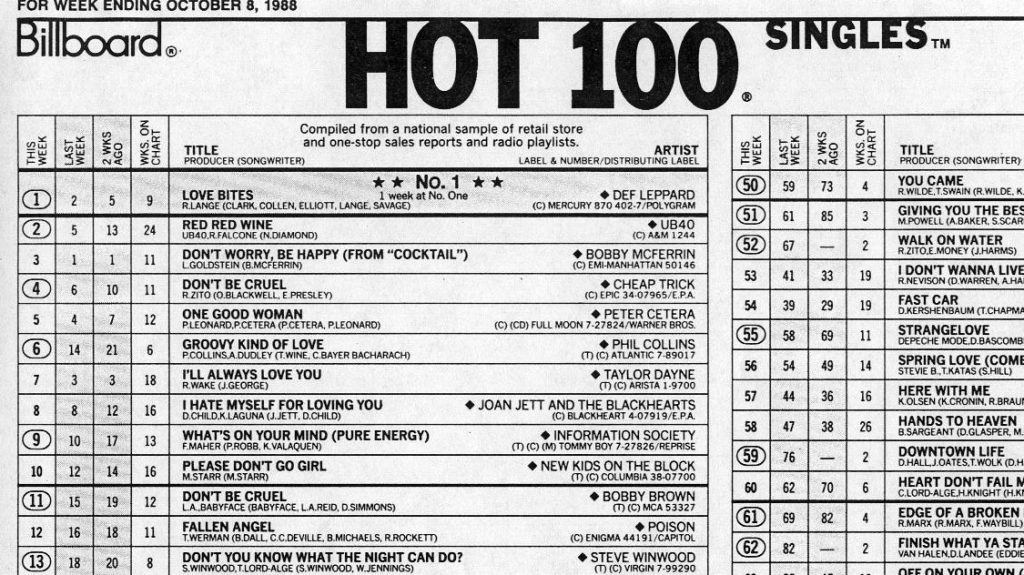 And it still wasn’t done! “Armageddon It” was up next, then “Rocket.”

My local radio station actually started playing “Excitable” and “Love and Affection” — 2+ years into the album’s release…and after seven singles! Some bands don’t even have that many hit singles over the course of their career, let alone on only one album!

That’s how special “Hysteria” was…and continues to be over 30 years later.

I also found it entertaining and intriguing to watch “Hysteria” battle it out with other chart-toppers during that period, like Guns N’ Roses’ mighty “Appetite for Destruction,” Van Halen’s “OU812,” George Michael’s “Faith” and so on.

On a personal note, I believe “Hysteria” sparked my interest in the music business and marketing, and getting a core understanding of what helps drive a successful product (besides actual sales, of course).

I’m referring to what the most effective advertising methods are, the radio promotion timing for a single, the overall marketing strategy for an album, how a band was branded, etc.

Looking at the bigger picture, this also goes to show what a long-lasting impact a good, quality product can have.

It also applies to any of the products you purchase these days. It’s at the core of creating a long-lasting and loyal relationship between a brand and a consumer.

It’s also where the phrase “They sure don’t make’em like they used” comes up quite often. That can apply to oh so many things.

Back to the song “Hysteria,” humor me for just a minute as I put on my marketing hat.

Of course, it’s a stretch, but one can even learn simple customer relationship management lessons from the song’s lyrics:

Always make sure you do not lose touch with your target customer, keep communication ongoing.

“OUT OF REACH, YEAH”

Make the effort to find the most effective way to get (and keep) in touch with your customers, engage them.

“YOU CAN TRY TO GET CLOSER TO ME”

Work towards finding out your customers’ preferred method of communication, and how to better understand them.

This applies to the marketer: it sometimes takes trial and error, but in the process — and with a bit of luck — you sometimes go down an unexpected path that ends up leading you to an even more successful result.

Again, to the marketer: you might feel overwhelmed by the challenge, at a roadblock. Keep trying. Assess the situation, reassess any and all available reporting, and plan your next steps.

“HYPNOTIZED, I’M SHAKING TO MY KNEES”

Consider this the desired end result: A customer ultimately feels that a brand or service knows them SO well that it can address needs they didn’t even know they had! They. Must. Have. It. Like they’re under some spell, or a Jedi mind trick is in force. Talk about customer loyalty! (I’m sure you can come up with brands that have this kind of following.)

Yes, I know the song’s lyrics aren’t really about marketing lessons, but I hope anyone involved (or aspiring to be) in the marketing profession found this example useful, if not, mildly entertaining.

It’s not rocket science either; these are just basic marketing concepts to keep in mind when promoting a product — YOUR product — to a target audience.

And it’s an example of utilizing the knowledge you already know so well and simply applying it in a totally different way.

Obviously, I look back fondly on this album. (I’m also glad that “Hysteria,” along with the rest of the band’s catalog, was FINALLY released digitally. You can check out the band’s entire digital catalog here.)

My career hadn’t even begun when the album was released, but those early days definitely left a lasting impression on my professional life.

As a big fan of the Def Leppard brand, I marveled at how “Hysteria” was being marketed, how the singles were being promoted — from which tracks were chosen as singles and their order of release, to how sales and radio airplay performed in different parts of the country.

And who can forget how each single that was released (on a 45 record and cassingle) contained portions of the unforgettable album cover, as seen in the image below? Great marketing idea — make it collectible! 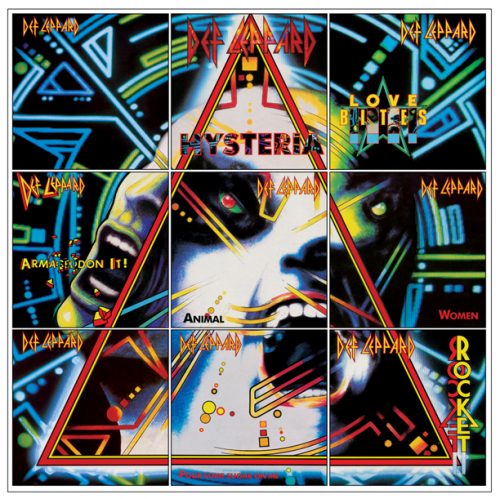 As I said, I had such an interest in these kinds of things, so much so that it helped me decide on a career. I’ve spoken to many people over the years who are right out of school or in a job they feel stuck in, and they can’t quite figure out what they want to do. I’ll just say it’s such a treat when you can take something you’re really passionate about and develop it into something that can benefit YOU. Easier said than done, but I look at it as everyone’s an expert at something — discover it and make the most of that interest!

Even though “Hysteria” might not be your favorite Def Leppard album, heck, even if you’re not a Def Leppard fan, I encourage you to revisit a favorite album of yours and recall what it was like hearing it for the very first time.

I’m guessing it will take you back to a special place and time, and brings back certain memories. More times than not, it’s a really nice, comforting feeling. And for anyone still not quite sure what you want to with your life, this might be just what you need.

On a side note, I did get to meet Def Leppard several times early on in my career — band members Joe Elliott, Rick Savage, Phil Collen, Rick Allen, and Vivian Campbell (unfortunately, I never got to meet Steve Clark before he passed away) — when I worked in the music business, but that’s another story for another day!

As for whether Def Leppard should be in the Rock & Roll Hall of Fame, well, that’s a whole other discussion.

By the way, if you ever want to read more about the band’s earlier years, leading up to the “Hysteria” album release, I highly recommend the rare, out-of-print book “Def Leppard: Animal Instinct” by David Fricke. It’s a book any Def Leppard fan would enjoy.