Def Leppard was FINALLY inducted into the Rock & Roll Hall of Fame in 2019!

The band had been eligible since 2005, which still brings into question the Hall of Fame’s nomination and selection process — for example, Janet Jackson was also a 2019 inductee; is that fair when so many other deserving ROCK artists await their turn?

The argument detailed below questioning the Hall of Fame’s credibility continues, as does which music acts they ultimately deem more worthy over others — including, should Bon Jovi have been inducted before Def Leppard?

“Co-headlining” would have made more sense, and the comparisons in the article below between Def Leppard and Bon Jovi are all the more relevant and applicable.

Which band REALLY deserves to be the headlining act? Enjoy the read below!

You might have a particular music artist who hasn’t been inducted into the Rock & Roll Hall of Fame, but after so many years of waiting for their time to come, you no longer care.

That being the case, it’s still bothersome that the Rock & Roll Hall of Fame committee voted in Bon Jovi before Def Leppard, not to mention snubbed Def Leppard since 2005 (the year the band first became eligible).

What added to this irritation were articles stressing — or attempting to validate — why Bon Jovi’s accomplishments deemed them more than worthy for induction.

After reading through critics’ rationale and all the contributions they cite for Bon Jovi, it further convinced me that Def Leppard should have been in the Rock & Roll Hall of Fame first.

Article: Rolling Stone – “Why Bon Jovi Belong in the Rock and Roll Hall of Fame”

What Is The Criteria For The Rock And Roll Hall Of Fame?

The article goes on to say that, “The Rock Hall determines an artist’s eligibility based on ‘influence on other performers and genres; length and depth of career and catalog; stylistic innovations; or superior technique and skills.'”

Before I continue, I want to make it clear that my main issue isn’t with Bon Jovi.

This argument can apply to other artists already in the Rock & Roll Hall of Fame and the many other acts whose fans feel are continuously snubbed. Some examples include Boston, Iron Maiden (lead singer Bruce Dickinson’s opinion of the Rock & Roll Hall of Fame includes his belief, “It’s run by a bunch of sanctimonious bloody Americans who wouldn’t know rock ‘n’ roll if it hit them in the face…”), Motley Crue, T-Rex, and so on. To each their own.

My issue is specifically with the Rock & Roll Hall of Fame’s selection/voting process. The inconsistency in the “rock & roll” artists they’re nominating and inducting is baffling and borderline ridiculous.

It makes you wonder — are they nominating just to nominate? Is it their goal to reach a certain number of nominations annually just to fill a quota instead of truly considering worthy rock & roll acts — after all, this is the ROCK & ROLL Hall of Fame — who’ve earned it, regardless of how many nominees there are in a particular year?

Rise Up, Gather Round: Def Leppard vs. Bon Jovi

Def Leppard is one of only five rock acts that has two or more albums that are Diamond certified (10 million U.S. copies sold). The other rock acts in this elite club that have achieved this feat in their careers are The Beatles, Led Zeppelin, Pink Floyd, and Van Halen. Def Leppard accomplished it with back-to-back albums!

But if you were to compare Bon Jovi vs. Def Leppard — have a band “face-off,” if you will — it’s quite interesting to look at each band’s two biggest selling albums.

Oh, and before we begin, saying that Bon Jovi led the way with their style of music doesn’t fly — Bon Jovi formed in 1983. Def Leppard started in 1977, and for the record, “Slippery When Wet” came out 3 years after “Pyromania.”

Here are the stats…

First, “Slippery When Wet” vs. “Pyromania”…

Do these album face-offs leave you thinking that Bon Jovi’s slate of songs overpower Def Leppard’s?

Better yet, is it even a fair fight to compare “New Jersey” to “Hysteria”?

If anyone wants to bring up early Bon Jovi tracks like “Runaway” or “In and Out of Love,” I’m happy to match and raise you a “Rock Brigade,” “Wasted,” “Let it Go,” “High N’ Dry (Saturday Night)” or “Bringin’ on the Heartbreak.” Take your pick!


Of course, comparing Def Leppard to Bon Jovi can simply be considered a fun exercise, but I don’t doubt at least some friendly competition between the bands over the years.

I’m reminded of a quote I read in a magazine interview with Joe Elliott back in the ’80s, when he said this:

“I think that Livin’ On A Prayer is possibly one of the best rock songs that’s ever been written! Pop-rock song. I don’t think they would have written that song if Photograph hadn’t come out.” (Rock of The 80’s II Magazine) 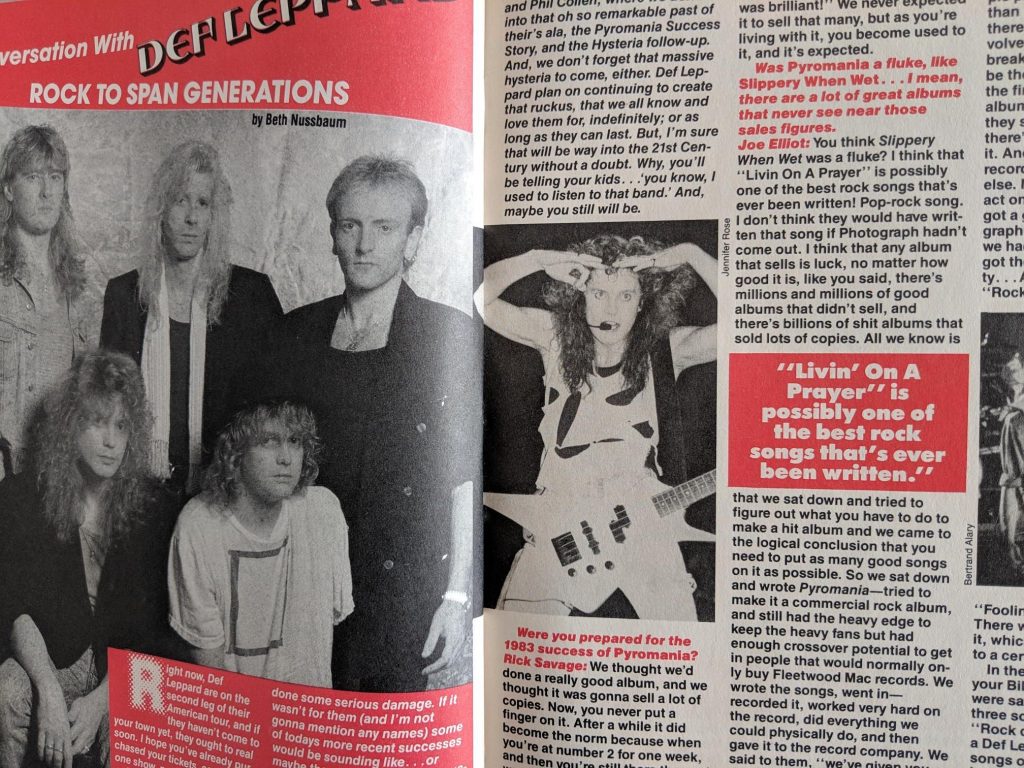 Much can be said about Def Leppard’s impressive legacy…

And the band plays on! Def Leppard continues to produce some GREAT songs. They may not top the charts anymore — the music industry has changed drastically over the decades — but the quality of work is still there.

“Adrenalize” and “Euphoria” had their share of favorites from “Let’s Get Rocked,” “Stand Up (Kick Love into Motion),” and “Have You Ever Needed Someone So Bad,” to “Promises,” “Demolition Man,” “Back in Your Face,” and “To Be Alive.”

“Slang” had some wonderfully written compositions like “All I Want is Everything” and “Where Does Love Go When It Dies,” not to mention other great tracks like “Turn to Dust” and “Pearl of Euphoria.”

Poppy (and, admittedly, unpopular to some) “X” had “Unbelievable,” “Long, Long Way to Go,” “Everyday,” and one of the catchiest choruses they’ve ever written with the underrated “Torn to Shreds.”

“Songs from the Sparkle Lounge” had “Tomorrow” and “Love,” which I believe could have been one of the band’s greatest epics, if only one more verse was added to the song’s second half to balance it out a bit more. (Just my humble opinion!)

Their album “Def Leppard” includes a plethora of good songs, including fan-favorite “We Belong,” which features each band member singing lead vocals for the first time. Overall, the album showcases many different musical flavors for Def Leppard fans to choose from and enjoy.

And I haven’t even mentioned the numerous single-ready, high-quality B-sides the band has put out over the years (for example, “I Wanna Be Your Hero” or the original version of “Tear it Down”) or one-off tracks they included in compilations and live albums (like “Fractured Love,” “Desert Song,” “Kings of the World” and so on…and so on).

The band has continued to churn out new music and appease long-time fans with their relentless touring, including a massive, successful co-headlining tour with Journey, hitting arenas and stadiums throughout the country. (As for their planned stadium tour with Motley Crue, much more about that can be read here.)

“We All Need Christmas” 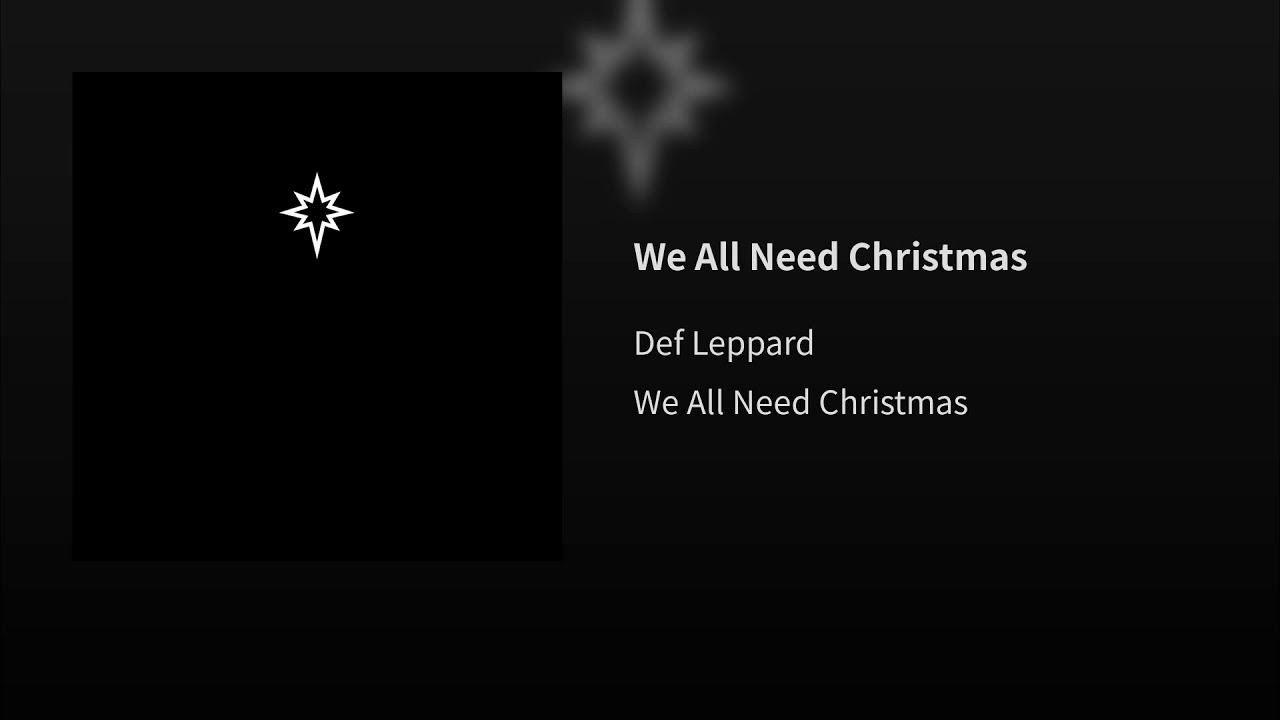 “The Story So Far: The Best of Def Leppard” 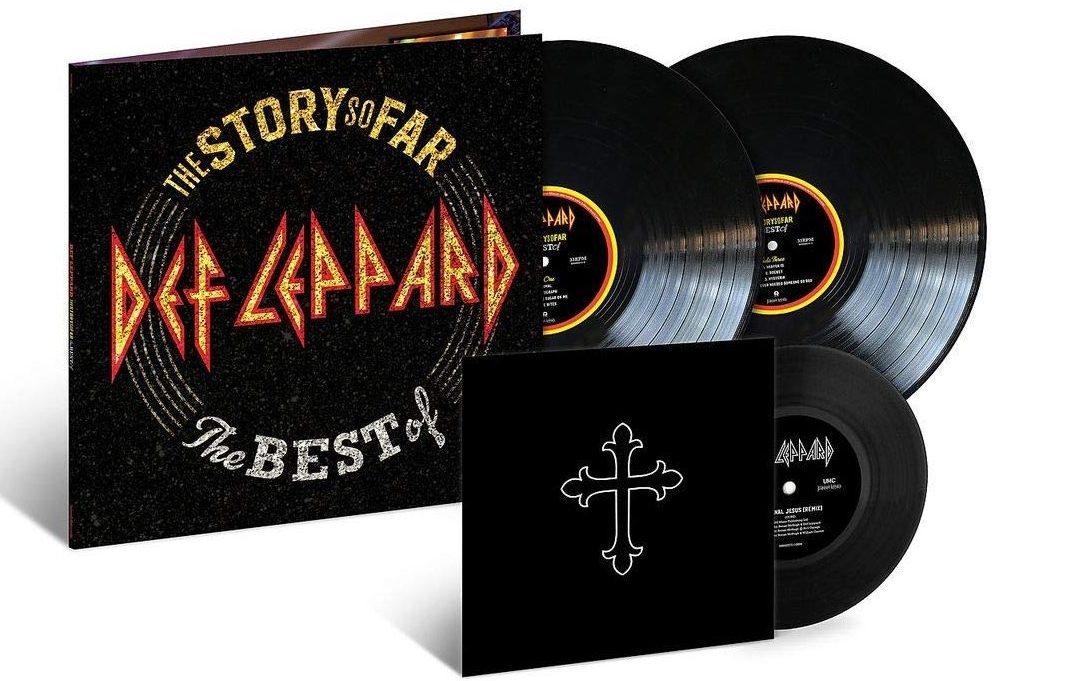 If you only want to download “Personal Jesus,” you can get it here: Amazon MP3 / iTunes

An analysis comparing the differences between Def Leppard’s greatest hits releases — Vault, Rock of Ages: The Definitive Collection, and The Story So Far can be found here. 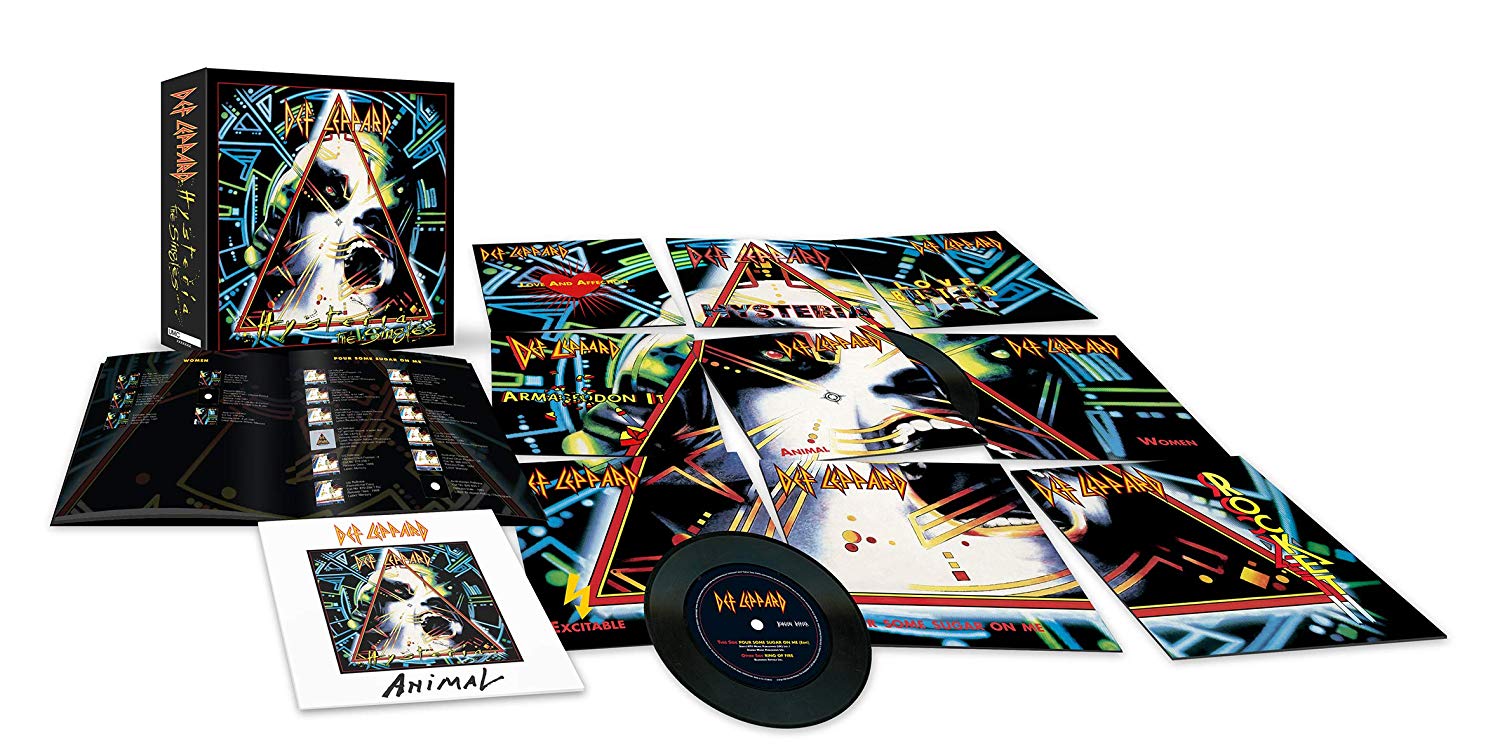 This limited-edition 10-disc vinyl box set is also available and includes all the singles (and excellent B-sides!) from the “Hysteria” album, plus a booklet featuring a complete discography, and an introduction written by Joe Elliott.

You can read a lot more information about Def Leppard and the band’s latest releases here.

After all these decades, there haven’t been public spats or breakups in the band, and no money-grabbing “farewell” tours (that aren’t even really farewells) or subsequent “reunion” tours.

Over the years, their music and influence have also crossed over. Country star Tim McGraw performed on their song “Nine Lives.” And speaking of country, Taylor Swift’s first choice was to perform with Def Leppard on CMT’s Crossroads concert. Mariah Carey even remade “Bringin’ on the Heartbreak.” And do you remember the musical/movie Rock of Ages?

One Direction’s song “Midnight Memories” caught the attention of many who instantly recognized their song as a ripoff of “Pour Some Sugar on Me.” The only question was whether Def Leppard would sue them — they didn’t.

And let’s not forget all the copycat 80’s bands who unsuccessfully tried to sound like Def Leppard. I’m not even going to bother naming any of them, but I’m sure you can think of a few.

Yes, both Bon Jovi and Def Leppard have sold an enormous amount of records. But it’s about so much more than that; it’s about the mark they leave behind.

“Hysteria” marked its 30th anniversary in 2017 and still sounds just as fresh today.


By the way, if you ever want to read more about the band’s earlier years, leading up to the “Hysteria” album release, I highly recommend the rare, out-of-print book “Def Leppard: Animal Instinct” by David Fricke. It was originally released in 1987 and features many interesting, candid stories about each band member, including legendary, original guitarist Steve Clark. It also includes a very insightful look into drummer Rick Allen’s car accident — the tragedy and, ultimately, the resulting triumph — and so much more. (Another book option for Def Leppard fans can be found here.) 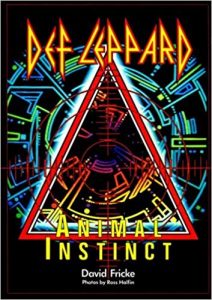 Def Leppard: Rock And Roll Hall of Fame Or Not — The Band’s Songs Stand The Test Of Time

Guitarist Phil Collen looked back on “Hysteria” and talked about its impact and legacy:

“Especially when you have guitar geniuses like Joe Satriani, Paul Gilbert, Steve Vai, and Brian May actually saying to you, ‘That is amazing guitar work.’ Y’know, Prince has mentioned it, Stevie Wonder has mentioned it. Alice Cooper actually said to me, ‘Whenever I go into the studio, I throw ‘Hysteria’ on, just to hear how the room sounds.”

I Don’t Want Your, I Don’t Need Your… Hall of Fame Induction!

Phil Collen originally shared a similar view, saying “I don’t know [if we will ever get inducted] and I don’t care, really.” He added, “The way I look at it, I’ve got two diamond albums sitting on my mantelpiece…That means the fans went out and bought it, so that means a lot more to me.”

What’s Taken The Rock and Roll Hall of Fame So Long?

What I know for sure is that Def Leppard’s achievements and contributions to rock n’ roll music are indisputable, but don’t tell me Bon Jovi is more deserving of being inducted first between the two bands.

Pour Some Sugar On Me…mories

Regardless of the 19 years it took for Def Leppard’s Hall of Fame induction to happen, looking back at blasting their music on the radio while cruising around, or rushing home to catch MTV’s “world premiere” of their latest music video, or getting in line at a record store to purchase one of their albums — on CD, cassette, or vinyl — remains a cherished memory.

It was also very welcomed news that Def Leppard’s entire catalog was finally released digitally! (You can check out the band’s complete digital catalog on iTunes here.)

Hopefully, a whole new generation will discover and enjoy some great music.

Do you think Bon Jovi deserved to be inducted into the Rock & Roll Hall of Fame before Def Leppard, not to mention so many other overlooked, worthy artists?

Feel free to share your thoughts in the comments below.